Introduction of the studio 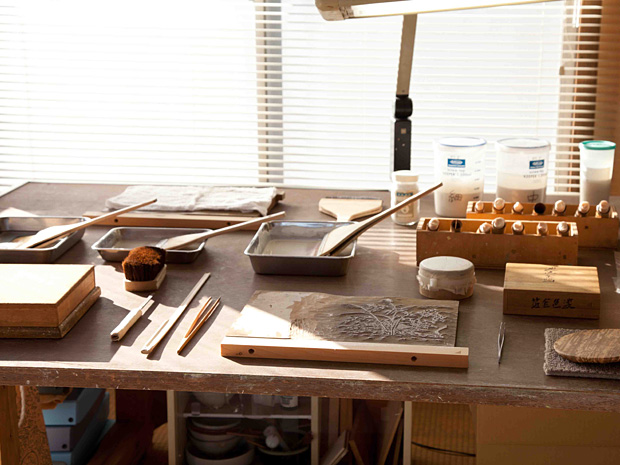 Toku Komuro (1899-1985), the founder of the studio, was involved in working on the reproduction of Kohitus (classic works of calligraphy) in Tokyo in around 1935. At that time there were several other artisans of dyeing, wood printing and foil processing who were working on the project together with him in the studio.
From these artisans Toku learned the basic techniques of every procedure and started to make Kanaryōshi by himself. With guidance from scholars of Japanese literature and calligraphers, Toku was able to make great efforts for his work and managed the entire production process alone.
Towards the end of the WWⅡ, it became harder for Toku to continue his work because of the aerial bombardment of Tokyo, so he moved to his hometown, Hitachiōta city, in May,1945 and opened his studio two years later.
Since then the studio was taken over by Toku’s son, Yoshihisa (1931-2011), and his grandson, Hisashi(1962-), has inherited the studio and continues the traditional methods of Kanaryōshi.